Peru: Women Install Solar Panels and Light Up their Communities 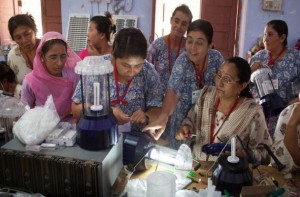 TACNA, PERU , Dec 9 2015 (IPS) – Five women from Candarave Province, located in Tacna (Peru), travelled to India to be trained and to learn how to install solar panels. The training has enabled 272 families to have electricity and improve their quality of life.

In 2011, Reina Isabel Humiri Mamani, 41, who has two children and two grandchildren, realized that, sometimes, to make a right decision, you have to break stereotypes, overcome fears and invest in knowledge. Although her mother, brothers, and some people in her community (Tacalaya) were against the idea, she accepted to take part in the Barefoot College programme, travelled to India for six months, and learned that electricity can be obtained by sunlight with the help of solar panels.

In December 2011, Reina together with four other women from Candarave, left for Barefoot College. This institution brings rural women together from around the world to Tilonia, a village in India, to share life experiences and most importantly, learn how to install and maintain solar panels – devices that convert solar radiation into electric energy – and thus improve daily life in their communities.

“At first I was afraid, because I knew what would happen. My family was sad, and in the community, they believed that it wasn’t true that I would come back to help, once I left. ‘My, you’re so brave’, they said,” Reina said to ConexiónCOP.

Before leaving, the inhabitants of the Candarave communities, starting from 6 in the afternoon – at sunset – were experiencing constant problems due to the lack of light. “I decided to travel to India so that I could have electricity. We used to cook or care for animals at night and children would study using the light of candles and lights. But we had to buy kerosene and would inhale the smoke, which caused us trouble breathing,” Reina explained.

As regards to what Reina said, the health system, Allina Health, warns that inhaling noxious fumes can cause disease in the lungs and airways. Moreover, according to a report by the World Health Organization (WHO), around 96,000 children die annually worldwide due to thermal burns, which may result from the use of lighters.

To participate in Barefoot College, Reina flew almost 30 hours. She arrived in India, changed her diet, and left her family. Reina explained that while in Tilonia, she mingled with women around the world, discovered other cultures, beliefs, ideas, and even a new language, and above all, learned about solar technology.

“At the beginning, our group of Peruvian women was greatly shocked by the many changes we faced. The food was different and we did not understand the language, but the teachers followed a method using colours, with which were able to communicate, and we learned how to install solar panels.”

At Barefoot College, the women learn using signs, numbers and colours. The method makes learning possible also by illiterate women. With the help of teachers, they are trained on how to install solar panels, troubleshoot and repair. Also, the aim of this programme is to be replicated in other communities.

When they came back to their communities, Reina and the others were recognized as engineers, a situation that no one had imagined when they were offered the opportunity. In each village, a “solar committee” was set up to organize the population. In January 2013, they received equipment imported from India, which came in “kits” in order to install a low-power solar system for electric lighting. The technology is based on LED lights, which, unlike the traditional types, can be repaired and need not be changed.

The installation of 387 solar units made it possible for 1,360 people (272 families) from nine communities in Candarave Province to have electricity. Alicia Condori Quispe, who was part of the Barefoot College coordinating team in Peru, told ConexiónCOP: “The team monitored the distribution process, but it was the five engineers who installed the panels in the families’ homes. Each beneficiary paid 35 [new] soles for the installation, and each woman was capable of installing up to four units per day. The beneficiaries were very satisfied,” she said.

However, maintaining the solar panels over the years is an issue that still needs to be improved. Due to the high transportation costs and the lack of budget and management in the communities, it was problematic to regularly hire women engineers. However, new populations have requested additional systems, which shows that the benefits outshine the obstacles. As a first step, the engineers trained the beneficiaries on the basic maintenance of the systems, who today can carry out simple repairs independently.

Candarave is province that is particularly vulnerable to climate change. The area lies between 3,500 and 4,800 meters above sea level, and the inhabitants are mainly engaged in trout and alpaca breeding. Alpacas have been affected by the increase of greenhouse gases, as frost and drought are compounded by the effect of climate change, thus affecting their food.

With the arrival of solar power, the children of Candarave can study at home with adequate lighting and improve their school results. The health of the populations has also improved because they no longer inhale the smoke of candles and lighters. In addition, this resulted in significant cost savings for families, because the lighting systems previously used were very expensive.

Villagers on their own initiative also brought power outside the home, which resulted in an increase in the productivity in traditional activities. Policarpio Pariguana, who owns a trout farm, installed five solar panels, which made it possible to feed his fish at night and in the early morning.

Similarly, Reina explained that the villagers who raise alpacas as she does, installed solar lighting systems to protect their alpacas at night and to prevent foxes, which usually eat baby alpacas, from coming near. Another initiative was taken by the parents in the community of Marjani, who collected money to pay for the installation of the solar system in the community school.

Rodrigo París Rojas, journalist, political scientist, diplomat and director for Latin America of Barefoot College, explained that when women return to their homes, they become transformative people who illuminate lives.

“When returning home, women want to stop the consumption of gasoline or kerosene, which provides feeble light and generates CO2 emissions. With the help of NGOs and state institutions facilitating the programme, they also want to do away with the risks of accidents and problems for children’s health due to the amount of smoke that they inhale,” said Rodrigo París Rojas.

In developed and developing economies, access to energy is often the difference between poverty and wellbeing. The importance of the Barefoot College programme, which invests in knowledge and empowerment of the people, lies precisely in this difference.

Rodrigo París explained that during their stay in India, rural women learn to fight and to overcome challenges, and realize that change for the better is possible.

A key component of Barefoot College is that the students are exclusively women, because there is a philosophical notion that very clearly indicates that women are the centre of communities. “Women are generous. They are mothers and grandmothers. They are great storytellers, sharing knowledge among themselves, and ensuring that it will not fade away. And they also think about transforming their environment,” concluded Rodrigo París Rojas.

This story was sourced through the Voices2Paris UNDP storytelling contest on climate change.