Liberia: Leading the Way on 1325…But Still Some Way to Go 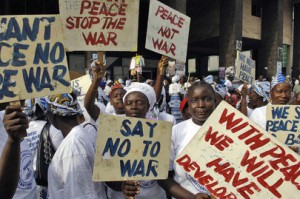 By Tamasin Ford and Tecee Boley*

Assistant Commissioner Bennetta Holder Warner sits behind her small brown desk covered with books and paper-filled manila folders papers. Her crisp black uniform shines as if it was just made. The Liberian lady is the head of the Women and children Protection Section, a position and unit that did not exist five years ago.

“In the past there was no such place where women or a child could go and carry a complaint and get redress,” says the Commissioner. “After the war, women and children being the most vulnerable group, it was decided that this section be established specifically for their complaints.”

Fourteen years of civil war in the West African state of Liberia saw some of the worst atrocities women and children have ever experienced on the African continent. More than 60 percent of women say they were raped, according to the United Nations Mission in Liberia. Many were used as sex slaves. Some were taken to war zones to have sex with children for ritualistic purposes, while others were forced to have sex with their own children and brothers. This special police department now operating in every one of Liberia’s fifteen counties was set up to deal with crimes of this nature, partly in response to the United Nation’s Security Council Resolution 1325.

“[1325] has had a great impact. I would say it is successful. For example we have so many female ministers,” says Commissioner Warner. “We have many female directors and even in the police we have deputy commissioners [who are] female and this shows that 1325 has had a positive impact.”

Liberia is the first African country to complete a National Action Plan to implement the United Nations Security Council Resolution 1325. Adopted unanimously in 2000, the legal document calls on countries in conflict to include women in the peace building process. It highlights the crucial role of women in the prevention and resolution of conflicts. When Africa’s first democratically elected woman President took office in Liberia in 2005, increasing the number of women in the country’s security services was one of President Ellen Johnson Sirleaf’s goals.

Liberia went through a devastating civil war from 1989 to 2003. At its peak in 2003 Leymah Gbowee of Christian faith and Asatu Bah Kennth, a Muslim woman, founded the ‘Liberian Mass Action for Peace’. They invoked their faith and shared human values in order to mobilize women across the churches and mosques. They managed to bring together thousands of women in the streets of Monrovia, all dressed in white. They presented their demands to the then president Charles Taylor and met with rebel leaders to pressure them to enter into peace talks.

The women mobilized hundreds of refugee women in camps in Ghana in 2003 and persuaded them go to the House of Peace Talks in Accra. They allied themselves with their colleagues from the ‘Manu River Women’s Peace Network’, which were inside the building as delegates. They blocked with a sit-in, barricaded the exits and the negotiators. They threatened to prevent them from leaving the building until they had reached an agreement.

That was the end of the war. Two weeks later, a peace agreement was signed.

Subsequently, women assisted in disarming the rebels and fought for a women’s quota of 30 percent in Parliament. Without them Johnson-Sirleaf would not have won the 2005 elections. Immediately after her election, ‘Ma Ellen’, as the President is widely known, pushed through a drastic legislation against rape. An exclusively female UN police force from India is responsible for security in the capital Monrovia and for the recruitment of female police officers.

And the numbers speak for themselves. Five years ago, one in 20 police personnel was a woman. Now, in 2010, nearly one in five is female. Fewer than one in ten women make up the armed forces but that is a big improvement from one in one hundred in 2005.

But there are still many challenges facing the full implementation of resolution 1325 in Liberia. Protecting women and girls from sexual violence and violence in general is part of its mandate. Yet, in the rural areas access to justice is often hard to find.

In Nimba County, in the north of the country, a fragile 27-year-old woman named Hawa walks out of her small concrete hut slowly, almost bending over her stomach. Sitting is difficult and painful. Hawa, which is not her real name, gave birth two months ago. But just four weeks later, she was attacked in her home and gang raped.

“Around 10.o’clock on Thursday night I was lying down inside with my baby and my big sister and the armed robbers came,” says the young mother as her eyes water with tears. “First they took two big rocks and threw it over our house.”

Hawa takes a seat made of hard brown wood and continues her story.

“They bust the door with the gun,” she says. “They were seven in number. They put everyone at gun point. They came and took my baby from my back. One person wanted to shoot me and the other four said, ‘Let’s carry her into the palm [grove] before we kill her.’ When they carry me they started raping me.”

Hawa looks down on the ground. Her braids of corn rows are slowly unraveling with one plait still firm in the middle of her head. Her house on a hill top, with lush green banana and palm trees around it, is less than a five minute walk from the nearest police depot.

Poverty is a driving factor

Hawa’s story is not an isolated one. Deddeh Kwekwe, the Gender Based Violence Coordinator at the Ministry of Gender and Development says access to justice is difficult for women all over the country. She says alleged perpetrators have started to lie about their age as they know there aren’t enough juvenile courts for them to be tried in. Police aren’t given the right equipment to carry out their jobs. They can’t reach the survivors and they don’t have the cars or the money to respond quickly in an emergency. Poverty is a driving factor.

“We found out people can’t even transport themselves to get to court,” she says. The Justice Minister is a woman but Madam Kwekwe worries that, especially in the rural areas, men have total control over the legal system.

“I feel it is male dominated because most of these people are men. The judges, the lawyers and the jurors are all men,” she says.” They are looking at it from that point to say this is a man, why would I want to send this man to jail? He is a man like myself.”

Back in Monrovia at the Central police station, the sound of the generator that provides electricity to Bennetta Holder Warner’s office penetrates the atmosphere. A white lace curtain hangs from above the only window. For Commissioner Warner, there is still a long way to go before Liberian women truly have full access to justice in Liberia.

“There are women who still not want to be open and complain,” she says. “Since we established the section, it was hard to complain especially for a Liberian to come and complain on your husband or a child to complain your parent.”

All over Liberia stigma and discrimination of women remains a problem for the success of 1325.

A police detective, who prefers to remain anonymous, says,” People are not in our area to promote females,” she says. Although she works in a senior position she says this is not recognized in her monthly salary. “If you are not connected with the boss who is a man. And a connection may be a friend, a loving friend. That means the man should be your lover.”

And this is seen in all walks of life in Liberia. Poverty, access to education and the lack of economic power puts women in a difficult position when it comes to means of survival. They are forced into situations where they have no choice but to use their bodies to get food, school fees, exam grades and promotions. A recent article in one of the capital’s newspapers found children as young as ten were having sex with men for as little as 3 cents.

But there is hope, says Assistant Commissioner Bennetta Holder Warner.

“You know it is a challenge to work with the men, I can tell you that,” she says. “There are many times you feel frustrated, you are intimidated but you have to be firm and stand on your feet and know what you are doing and what you stand for. Once you are determined and you have that passionate for your work, you can do it.”

Bennetta Warner’s office is small and noisy. Every five minutes there is a knock on her door, perhaps someone demanding to see her or just an officer who wants to use the only printer in the department. Photographs of police officers adorn the walls, most of them women. “I can see a big change. Because most of the women, before the war, used to sit home. Our mothers and fathers used to educate the boy children,” she says.

And it is true. Women are making their mark in Liberia. With a fiercely bold female President, who’s determined to push UNSCR 1325, there is a strong sense that life is changing for women here. “Now people find interest in educating our girls children so they can become somebody for tomorrow instead of being in the home cooking, washing, taking care of the house,” says the Commissioner.

And that vibe of pride and determination doesn’t just emanate from Bennetta Warner’s office. Walking out of the crowded department, another female police officer adds, “The women now know that anything men can do, they can do also.”

* Tamasin Ford is BBC Reporter and Media Trainer in Liberia. Tecee Boley is a Fellow of ‘New Narratives’, a project supporting female reporters in Liberia.