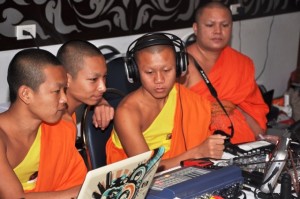 BANGKOK, Jan 2016 (IDN) – While a ‘Mindful Communication’ fad is currently sweeping across the United States, a group of Asian scholars and media practitioners gathered here to examine how this traditional Asian way of communication could be adopted to train 21st century journalists to create a media that would promote harmony rather than conflict.

Phuwadol Piyasilo Bhikku, a communication arts graduate from Chulalongkorn University and a former journalist, who is now a Forest Monk in northern Thailand, in an opening speech to the symposium noted that mindfulness practiced in the West is “a bit problematic”, because it is used mainly on an individualistic level to de-stress.

“Mindful practice in the West tries to be secular and is practiced without having any religious values in it,” he argued. “You need to accompany it with panna (wisdom). Without this moral wisdom, the practice will not be enough to drive us in the right direction to help society.”

As a practical approach to journalism, Bhikku Phuwadol explained that because at the root of Buddhism is the need to eradicate suffering, by being mindful of the suffering, you can report an issue without promoting division and conflict

The symposium titled ‘Mindful Communication for ASEAN Integration’ was held on December 14 and 15 at the Communication Arts Faculty of Chulalongkorn University in association with the International Program for the Development of Communication (IPDC) of UNESCO. This gathering was part of a process to develop a new journalism training curriculum for Asia incorporating thoughts, concepts and ideas from Asia’s age-old Buddhist, Hindu and Confucius philosophies.

The other keynote speaker, renowned Thai social activist Sulak Sivaraksa warned that a fixation on mindfulness could lead to something negative. Pointing out that mindfulness training has become popular with American corporate executives, he said it could make them more ruthless in pursuit of profit making, if this training is not accompanied by ethical training. “Learning about sila (ethics), greed, hatred and delusion are needed for mindful communication towards sustainable development,” he argued.

Many speakers pointed out that these Asian philosophical thoughts are as valid today as these were 2000 years ago, and these are being appropriated by western intellectual community – like the current Mindful Communication fad – without giving due recognition to its origins. At the same time young Asians are growing up with the delusion that anything modern comes from the West, and their ancient philosophies are irrelevant to shaping their modern lifestyles.

Dr Binod Agarwal, former Vice Chancellor Himgiri Zee University from India pointed out that UNESCO’s earlier attempts to introduce a journalism curriculum for ‘emerging countries’ have “largely been Euro-American in approach and incorporated theoretical and ideological perspectives being followed in the West”. He blames this more on the Asian intellectual communities that are largely educated in the West and uncritically transmit this knowledge to their Asian counterparts.

As one speaker pointed out, Asian communication scholars teach their students that the mass media originated with the printing of the Gutenberg Bible in Germany in the 15th century, while ignoring the fact that six centuries earlier the Chinese had printed the ‘Diamond Sutra’ that helped to spread Buddhism across Asia through the printed word.

There was also discussion on why the Asian media uncritically follows the western media’s focus on the South China Sea disputes that could lead to conflict in the region, while paying lip service to China’s proposed Silk Routes projects on land and sea that could bring much economic progress to the region and propel cooperation and prosperity across Asia.

Professor Kwangsoo Park, Director of Research Centre of Religions at Wonkwang University in South Korea, pointed out a similar trend in the media in his country when it comes to reporting North Korea. “They always report of North Korea’s nuclear weapons but ignore such issues as family reunions and economic relations between the two countries,” he noted, adding that “(Korean) media needs to understand these issues more deeply”.

Going to the roots instead of sensationalizing

Retired Malaysian diplomat Dr Ananda Kumaraseri of the Human Development and Peace Foundation believes that, we need to “de-culturalise” the journalist. “We need to understand what the mind is because problems are created by humans,” he said, arguing that the media plays on the mind by sensationalizing the problems, promoting sensual desires and consumerism. “We need to train journalists to direct their minds towards the roots of the problems (not sensationalizing it),” he added.

Professor Supaporn Phokaew of Chulalongkorn University’s Communications Arts Faculty tends to agree. She argued that a good knowledge of the concepts of loving kindness and compassion towards living beings, a fundamental aspect of Buddhist teachings, could equip the journalist with a deep sense of empathy towards others (they report about). “We teach students writing and speaking skills, but not listening skills,” she noted, adding: “We need to introduce teaching deep listening skills to practice mindful communication. We need to listen to people to relate to society.”

The western gospel of human rights also came in for much criticism with Asian scholars pointing out that ill conceived and arrogant applications of individualistic rights have created chaos in the Middle East turning the Arab Spring into a bleak winter. They also pointed out that free speech has limits citing the Prophet Mohammad cartoon episodes in Denmark and France. They argue that this gospel needs to be critically examined in Asia.

Bhutan’s Royal Thimpu College Dean Dorji Wangchuk believes that what is good from the West could be adapted in Asia “to suit our needs and values”. He described his kingdom’s national ideology Gross National Happiness (GNH) as “development with values”. He pointed out that the ‘fourth estate’ model of western journalism is fast disappearing due to the rise of the social media, which is offering different forms of story telling and social interaction. Rather than a commercial model, he argues that Asia should aspire to development of a media model based on contentment.

He calls the contentment media model as the Middle Path. “Bhutan is building a form of journalism that advocates contentment, community, compassion and core values of Bhutanese society,” Dorji explained. “The Middle-Path journalism will promote news as a social good and not as a commercial commodity – and will help build communities, consensus and contentment and not thrive on conflicts, controversies and commercialism.”

While open discussion and debate is essential for a healthy human community, Malaysian Lim Kooi Fong, Director of the Buddhist Channel argued that it has to be accompanied by responsibility. He pointed out that there is much to learn from the Buddhist philosophy in this regard, but it should not be used to distract criticism of authoritative ruling elites, like in the ‘Asian Values’ debate of the 1990s.

“Underlying some of the Asian voices is the genuine concern that a liberal individualistic ethos in conjunction with a legalistic, aggressive and consumerist attitude does not meet traditional values of Asian societies, that is, values such as social harmony, respect for family and authorities and in particular emphasis on duty and responsibility rather than on claimable rights,” argues Lim, adding: “The representatives of ‘Asian Values’ and the defenders of a ‘Western Liberalism’ could learn from one another and in a sense complement each other.”

Responsibility and accountability, argues Thai writer and poet Khunying Chamnongsri Hanchanlash, should come naturally to a mind that is trained in the three principles of Buddhist practice of moral conduct (sila), composure of mind (samadhi) and insight (panna).

“Mindfulness, is a quality that is developed from the practice,” she points out. “For communication, it is an exploration of what arises in one’s own mind, the emotions, the bias, the motive, before the actual act of communication. It is the space of ‘knowing’ in which one is able to decide rather than react.”

A Vietnamese Catholic scholar is of the view that in presenting mindful journalism to the ASEAN community one needs to be careful, so that it is not seen as a religious concept. “To sell this to a non-Buddhist audience this needs to be attached to ethics and virtues that are reflected in other religious traditions too.”

Ethics and virtues are indeed an important part of the Asian tradition argues Professor Park, noting that not only in Buddhism but also in Confucius philosophy these practices are given pride of place. Quoting Taoist philosopher Chuangtzu, he argues that the adversary style of journalism could be transformed into a more cooperative and active problem-solving style of journalism.

Fellow Korean, Emi Hayakawa of the Korean Buddhist TV Network (BTN) gave an example of how this could be practiced. She showed an example to illustrate it, when a major shipping disaster happened in Korea in April 2014, while the major KBS network reported extensively on the number of dead, recue operations and showing body bags and the grieving, BTN focused on how the Buddhist community is praying for the safe return of the survivors and how they are consolidating family rescue plans and helping in the healing process.

“The journalist has a critical role to convey that communities and spiritual leaders of the world can play an important role in addressing the enormous (development) problems (of the human race),” argues Prof Park. “The journalists should develop their interest in new ethical values to benefit the weak and poor people in the global economy (and point out) it is necessary for all of us to change our lifestyles (to avoid) a global financial crisis.”

Noting that the practice of mindful journalism is a secular practice rather than a spiritual one, Hanchanlash believes compassion and respect for the individual, as a positive link, will be essential in the creation of ASEAN community as a beautiful mosaic of culture and beliefs. “With mindfulness of the users, the powerful tool of mass communication can become an effective agent in the building of an unselfish and constructive society,” she argues.