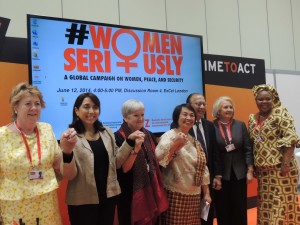 London, 12 July 2014. “If we are serious about peace, we must take women seriously.” This is the theme of the Global Campaign on Women, Peace and Security dubbed “Women. Seriously!” launched June 12th at the Global Summit to End Sexual Violence in Conflict held at ExCel London.

The campaign is being convened by a group of eminent leaders from around the world including a Nobel Peace Laureate, activists and former diplomats who are committed to women playing a leading role in peace and security.

The Conveners’ Group, led by Irene M. Santiago, who was the main organizer of the NGO Forum on Women in China in 1995, are the following: 2011 Nobel Peace Laureate Leymah Gbowee of Liberia; Ambassador Anwarul K. Chowdhury of Bangladesh, who was president of the United Nations Security Council when Resolution1325 on women, peace and security was passed; Ambassador Swanee Hunt, former U.S. Ambassador to Austria and founder and chair of The Institute for Inclusive Security; Ambassador Melanne Verveer, inaugural U.S. Ambassador for Global Women’s Issues and current executive director of the Georgetown Institute for Women, Peace and Security; Baroness Mary Goudie, senior member of the British House of Lords and member of the board of Vital Voices; Ms. Winnie Byanyima, executive director of Oxfam International, director of gender and development UNDP, and former Ugandan Member of Parliament; Ms. Ruth-Gaby Vermot-Mangold, co-president of PeaceWomen Across the Globe and former member of Swiss National Council and Council of Europe; Ms. Luz Mendez, former negotiator of Guatemala peace talks and vice-president of National Union of Guatemalan Women (UNAMG) executive board; and Ms. Madeleine Rees, secretary-general of the Women’s International League for Peace and Freedom (WILPF).

Santiago stressed that women will no longer be the “underside of history”. She called 2015 “a time of commemorations” as it is the 20th anniversary of the Beijing conference and NGO Forum, the 15th anniversary of UN Security Council Resolution 1325, and the 100th anniversary of Women’s International League for Peace and Freedom, the oldest women’s group working for peace. “No more waiting,” Santiago added.

UK Foreign Secretary William Hague, who co-chaired the Global Summit to End Sexual Violence in Conflict, met with the conveners’ group before the launch and declared that he will “do everything” he can to support the campaign. “The Government of the United Kingdom will support this wholeheartedly,” he said.

Secretary Hague’s co-chair, UNHCR special envoy Angelina Jolie, who was present during the meeting, also endorsed the global campaign and congratulated the conveners for this effort to promote the leadership of women in peace and security.

The campaign will run for 16 months, culminating in October 2015 during the 70th anniversary of the UN. It aims to create a broad-based movement who believe that “women are indispensable to peace” and who recognize that women are more than just victims in conflict, they are also agents of change, representing untapped potential for creating a more peaceful, secure and just world.

“Women’s Peace Tables” will be formed across the globe particularly in conflict-affected countries to increase the visibility of women’s leadership in negotiating and bujilding peace.

An Experts Workshop on Women, Peace and Security will be convened in April 2015 to create a manifesto for policy and action that will be submitted to the U.N. General Assembly, and chart the course for sustainable and equitable peace worldwide. The culminating activity will be dialogues at the UN and a celebratory event to commemorate Beijing+20.

The campaign launch was supported by the German Federal Ministry for Economic Cooperation and Development.