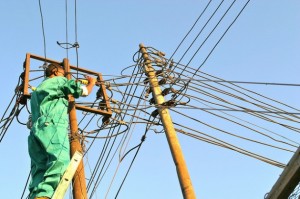 A man repairs an electricity pylon in Somaliland. Credit: IPS

UNITED NATIONS, Jun 2 2014 (IPS) – When night falls, there are over 1.3 billion people, mostly in the developing world, who live in virtual darkness because they have no access to electricity.

But United Nations Secretary-General Ban Ki-moon has vowed to help achieve the ultimate goal of Sustainable Energy for All (SE4ALL) by the year 2030 – long after he leaves office in December 2016.

Asked if the goal was feasible, Christine Lins, executive secretary of the Renewable Energy Policy Network for the 21st Century (REN21), told IPS the three interlinked SE4ALL objectives are both technically feasible and absolutely desirable from a societal perspective, including climate, economic and health considerations.

The three objectives are: doubling the share of renewables in final energy consumption (from 18 percent in 2010 to 36 percent in 2030); doubling energy efficiency; and securing sustainable energy access for all by 2030.

“Supplying secure, affordable, clean energy to an additional two billion people will be no small undertaking. But I believe it is a challenge that presents our industry with [the] greatest opportunity of a generation.” — Naji El Haddad, director of the 2015 World Future Energy Summit

“However, for these objectives to be reached by 2030, bold policy action is needed, securing stable and predictable policy frameworks in all three areas,” she cautioned.

“There are numerous energy access programmes in place in different parts of the world and energy efficiency policies are spreading but we need to accelerate the pace,” she added.

For Sustainable Energy for All to become reality, current thinking needs to change: continuing the status quo of a patchwork of policies and actions is no longer sufficient, Lins said.

“Instead, technology developments, finance models as well as stable and predictable policies need to be systematically linked across the public and private sectors in order to support and drive the transition process,” she declared.

He said between 600 and 800 billion dollars were needed from now until 2030 to reach the goals of access to energy, energy efficiency and renewable energy.

According to the United Nations, there are also more than 2.6 billion people who use traditional fuels for cooking and heating, causing the premature deaths of 4.3 million people each year, mostly women and children, from the effects of indoor smoke.

As the United Nations readies for the first annual SE4ALL forum later this week (Jun. 4-6), Ban said the meeting will launch the ‘U.N. Decade on Sustainable Energy for All’ with a two-year focus on energy for women and children’s health.

The forum, to be attended by leaders of government, business and civil society, will help “build momentum on solutions ahead of the September Climate Summit and contribute to shaping the direction of energy policy for the crucial decades to come.”

Naji El Haddad, director of the 2015 World Future Energy Summit that is scheduled to take place in the United Arab Emirates (UAE) next January, told IPS that with global population expected to rise to nine billion (from the current seven billion) over the next two decades, the world’s energy demand will increase by more than 50 percent.

“Supplying secure, affordable, clean energy to an additional two billion people will be no small undertaking. But I believe it is a challenge that presents our industry with [the] greatest opportunity of a generation,” he added.

Asked for a definition of sustainable energy, Lins told IPS it is energy that meets the needs of the user without negatively impacting the environment, the economy or the social structure.

She said primary energy is an energy form found in nature that has not been subjected to any conversion or transformation process.

Lins pointed out primary energy can be non-renewable or renewable.

Primary energy sources are transformed in energy conversion processes to more convenient forms of energy that can directly be used by society, such as electrical energy and heating and cooling, as well as fuels.

“Renewables can meet all these demands,” she said, on the eve of the release of a new study entitled ‘Renewables 2014 Global Status Report’ by REN21.

In June 2012, world leaders at the Rio+20 Summit in Brazil expressed their strong support to make sustainable energy for all a reality and thereby help eradicate poverty, leading to sustainable development and global prosperity.

Lins told IPS renewables are the only primary energy form that can meet human energy needs in a way that ensures equitable energy access (it is sizable: decentralised, centralised, stand-alone) and mitigates climate impacts.