U.N.’s New Development Goals Must Also Be Measurable for Rich 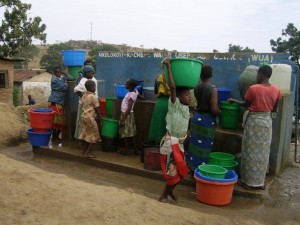 A water kiosk in Blantyre, Malawi. Activists argue that water and sanitation must be a stand-alone goal in the post-2015 framework. Credit: Charles Mpaka/IPS

UNITED NATIONS, Jul 15 2014 (IPS) – The United Nations is on the verge of releasing a new set of Sustainable Development Goals  – perhaps 17 or more – to replace the eight Millennium Development Goals which will run out by the end of 2015.

The proposed new Sustainable Development Goals, which will make amends for the shortcomings of the Millenium Development Goals, will be an integral part of the U.N.’s post-2015 development agenda which, among other things, seeks to eradicate extreme poverty and hunger from the face of the earth by 2030.

Neelie Kroes of the European Commission says the new development agenda is being described as “the most far-reaching and comprehensive development-related endeavour ever undertaken by the United Nations in its entire history.”

But Jens Martens, director of the Global Policy Forum, told IPS that in general, the current list of proposed goals and targets is not an adequate response to the global social, economic and environmental crises and the need for fundamental change.

The proposed Sustainable Development Goals list, he pointed out, contains a mix of recycled old commitments and vaguely formulated new ones (such as the goal 1.a. to “ensure significant mobilization of resources from a variety of sources to provide adequate and predictable means to implement programmes and policies to end poverty in all its dimensions.”).

According to some development experts, the world’s rich nations have mostly failed to meet their obligations on Millenium Development Goals target 8 which called for a “global partnership for development” between developed and developing nations.

As the Geneva-based South Centre points out, “The Sustainable Development Goals should not be a set of goals for only developing countries to undertake as a kind of conditionality or new obligations.”

The Rio-plus-20 outcome document, adopted at an international conference in Brazil in 2012, specifically said the new goals should be “universally applicable to all countries,” including developed countries.

The list also includes the sustainable use of water and sanitation, energy for all, productive employment, industrialisation, protection of terrestrial ecosystems and strengthening the global partnership for sustainable development.

The Open-End Working Group is currently holding its 13th – and perhaps final – round of negotiations ending Friday, after which a report is to be submitted to the General Assembly in August.

The final set of goals is to be approved by world leaders in September 2015.

Until then, said one senior U.N. official, “there may be plenty of deletes and inserts.”

Martens told IPS governments should not repeat the mistake of Millenium Development Goal 8 on “global partnership”, which was formulated so vaguely it did not imply any binding commitments for the North.

“What we need instead are measurable goals for the rich,” said Martens, who has been monitoring the last 12 sessions of the Open-End Working Group.

He said any post-2015 agenda must address the structural obstacles and political barriers that prevented the realisation of the MDGs, such as unfair trade and investment rules (including the investor-state dispute settlement mechanism) and the problems of tax evasion and tax avoidance by TNCs and wealthy individuals.

Among activist groups, there was widespread criticism that water and sanitation was not a “stand alone goal” in the current Millenium Development Goals but only a secondary goal under Goal 7 on “environmental sustainability.”

Nadya Kassam, global head of campaigns at the London-based WaterAid, told IPS, “We believe water and sanitation must be a stand-alone goal for the post-2015 framework, and we are encouraged by what we’ve seen so far.”

She said it is unthinkable that water, sanitation and hygiene could not be included – they are critical to so many other outcomes such as good health, education and economic growth.

U.N. Deputy Secretary General Jan Eliasson has made the importance of sanitation clear, with his campaign to end open defecation, which WaterAid strongly supports.

After nearly 15 years on from the Millenium Development Goals, the original goal on water to halve the proportion of people without has been reached globally. Yet coverage in sub-Saharan Africa remains poor, with 36 percent of the population still living without this essential service.

Kassam said access to sanitation is lagging the furthest behind, and at the current rates of progress, it would take sub-Saharan Africa, as a region, over 150 years just to reach the existing goal of halving the proportion of people without.

“So water, and in particular sanitation, need to be of central importance going forward,” she said.

Martens said it is a positive signal that the current draft list of proposed Sustainable Development Goals contains a goal on reducing inequality within and between countries.

“It will be of utmost importance that this goal does not get lost in the final phase of the negotiations,” he stressed.

However, it would not be sufficient to just have a single goal on inequality — each Sustainable Development Goal should have targets and indicators on distribution and inequality, Martens said.

Meanwhile in a statement released Monday, Reporters Without Borders said there was “heated discussion and opposition from certain OWG members such as Russia, Cuba and China” on a proposed Sustainable Development Goal covering media and information.

The protection of the right to information is in danger of being weakened or disappearing altogether, to be replaced by a vague reference to freedom of expression, the statement added.

At the Millennium Summit held in New-York in September 2000, 189 U.N. member-states adopted the Millennium Declaration based on the outcomes of several international conferences of the 1990s, including population, human rights, the environment, habitat and social development.

But the goals were devised not by governments through an open debate but by a working committee drawn from several U.N. bodies, including the World Bank, the International Monetary Fund, the U.N. children’s agency UNICEF, the U.N. Population Fund, the World Health Organisation (WHO) and the Organisation for Economic Cooperation and Development (OECD).

The goals were not the object of a formal resolution of the U.N. General Assembly.