Sudan/Darfur: Rape Is Not Adultery 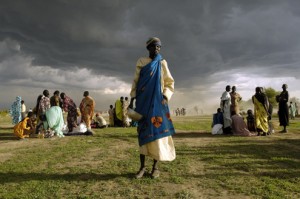 Khartoum (IPS/TerraViva) – Women in the Sudanese region of Darfur have been raped with impunity since the start of the conflict there in 2003. Now a campaign to reform the rape law is gaining momentum in the country, promoted by Alliance 149, a national coalition born in late 2009.

Under Article 149 – the portion of the Sudanese Criminal Code of 1991 which pertains to rape – the crime is defined as “zina”, intercourse between a man and a woman who are not married to one another, without consent.

The legislation states that a woman needs four male witnesses to prove that this act was “without consent”. If she reports a rape and cannot obtain such evidence, she will be charged with adultery and punished with 100 lashes, if unmarried, or with death by stoning, if married.

“The reformed law will be a success to all Sudanese women as adultery and rape will be separated and the criminal will receive a long sentence,” said Amro Kamal, a lawyer volunteering for the Sudan Human Rights Monitor and an Alliance 149 board member.

The Sudanese Criminal Code “is supposedly based on shariah laws, but the fact that Article 149 doesn’t distinguish between zina and rape is problematic and un-Islamic,” he said.

The western region of Darfur deserves a different approach. The ongoing conflict between non-Arab rebels, the Sudanese military and Arab Janjaweed militias has resulted in 300,000 civilian deaths and more than two million people internally displaced.

The Alliance suggests the adoption of international humanitarian laws to better suit the needs of victims of sexual violence in Darfur.

Women living there continue to face the risk of rape and forced displacement daily. Many have left their homes and live in government-established camps – some remain in these camps for years.

“It is not easy for a woman who has been raped in our community, especially when a baby is born from the rape. The community will not accept this baby,” said Mahbouba Abdur Rahman Ali, of the Women Empowerment Organisation

The Comprehensive Peace Agreement that ended a 21-year conflict between the Arab Muslim north and the Christian black south in 2005 requires legal reform to comply with international human rights standards, according to the Alliance.

“Sudan is not a signatory to the Convention on the Elimination of All Forms of Discrimination against Women (CEDAW),” a source from the Family and Child Unit told TerraViva. “This makes it difficult to reform current laws related to women because there is nobody responsible for women’s affairs.”

Alliance 149 is slowly gaining the attention of legislators. When it launched its campaign, in January, it attracted officials from the Ministry of Interior Affairs, the police forces, parliamentarians and representatives from political parties.

“It was great to see women’s groups and representatives from the government and the judiciary working together for such a great cause,” said Fahima Hashim, an Alliance board member and director of Salmmah Women’s Resource Centre.