Sri Lanka: Widows Struggle to Put Life Back Together Again 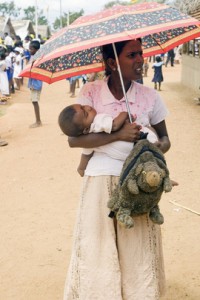 Colombo (IPS) – Having to take care of eight teenage children is not an easy task for 70-year-old Yamunadevi (not her real name).

But these youngsters are her grandchildren, orphaned by Sri Lanka’s civil war of more than two decades. “I have no option. I have to take care of them, otherwise they don’t have anyone else,” said Yamunadevi, who hails from Alampiddi, Mullaithivu district in the north.

Four of her grandchildren lost their parents during the last phase of this South Asian country’s bloody war, which ended in 2009 with a military victory by the government. The other four are left with only their father, who is now the sole breadwinner.

“I am not sure how long I can keep sending all of them to school,” Yamunadevi remarked.

Her story is all too common in Sri Lanka’s former war zones. Women young and old are left to fend for themselves and their families because their male relatives have been killed or went missing during the last battles of the war, which was waged by the Liberation Tigers of Tamil Eelam (LTTE) in its search for a separate homeland for minority Tamils.

Almost 300,000 people were forced to flee their homes during the last bout of fighting alone, between August 2006 and May 2009. Over 290,000 war- displaced citizens have since returned to their villages or live with host families. Their troubles, however, are far from over.

There are more than 89,000 widows in their early twenties and mid-thirties in the former conflict zones, government officials say.

The deputy minister of child development and women’s affairs, M A M Hizbullah, told a seminar here that some 49,000 widows — majority of whom are wives of Tiger rebels killed in action – live in the country’s east, and another 40,000 in the north.

In his native Batticaloa district, the deputy minister said, there are some 25,000 widows, of which 8,000 had three children each.

Hizbullah said that he had approached the Indian government – India has always kept a close watch on developments in its neighbouring country — for assistance to help the widows. But in some areas, programmes targeted toward their needs have already begun.

“We have plans to start a garment factory here,” said Roopavathi Ketheeswaran, a government official in Kilinochchi district, adding that women often find it hard to find regular work unless programmes are designed with their needs in mind.

Even when they find work, the pay is sometimes a pittance. Seventeen year- old Ravindranathan Valarmadu, who hails from Pillumalai village in eastern Batticaloa district, for example, earns about 17 U.S. dollars a month from working as a milk collector six days a week.

This kind of situation, when many expected the end of the conflict to bring about better lives, can make widows feel helpless.

“When you don’t have a husband, when you don’t have family and you are alone, it can be tough,” Rasanayagam Rahulanayani, the government agent for Vaharai division in eastern Sri Lanka, told IPS. “When assistance also slows down, the women can feel very vulnerable,” said the official, who revealed that she had lost her father in the conflict.

Even as Rahulanayani was speaking with IPS, more than half a dozen widows and women whose husbands had gone missing during the war waited patiently outside her office to apply for help in matters ranging from obtaining lost identity papers to documentation on deeds.

“Widows and single mothers still find it hard within a very male-dominated social system,” Rahulanayani explained. Traditionally, Tamil society dictates that men take the lead, and women are expected to follow, so that widows who now have to make all decisions, including taking care of the family business and dealing with private and public officials, may not always be fully comfortable with their new role.

Saroja Devi, a 27-year-old mother of two who was waiting to meet Rahulanayani, says her husband went missing while the family escaped the war in the north. “I don’t know where he is, or even if he is alive,” Devi said.

Subsequently, Devi moved back to the east, where she hails from and where she has some family near Vaharai. “He was detained by the Tigers for awhile when he refused to help,” Devi said. “We were running thorough shell fire when he went missing. There was shell fire all day and I don’t how we escaped.”

At this point, Devi’s search for her husband is one that is more hope than anything else. Meanwhile, she has to eke out a living for her family.

There are hardly any jobs available in Vaharai, which lies deep in the interior of Batticaloa district, and where the key occupations are fishing and farming.

“I’m not doing anything right now. I help out my family members in the fields and they give me some money,” Devi said, adding that she had no choice but to sell all her gold jewellery — or starve.

Standing next to Devi in the queue, 29-year-old Navunad Sudha no longer has jewellery — they had been long sold. Sudha’s story is similar to Devi’s. She hails from the Vaharai, married a man from the north, and was separated from her husband while fleeing the fighting.

But unlike Devi, Sudha believes that her husband, who disappeared in April 2009, is in government custody. “I will look for him till I get some proof,” Sudha said.

Meanwhile, the challenges of day-to-day existence press on Sudha, who is seeking help from government officials to buy a sewing machine. “I stitch clothes at home to make some money,” she said.