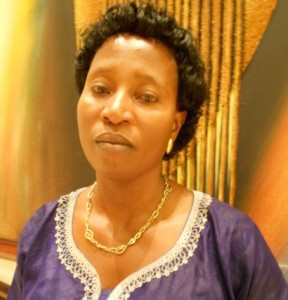 Rwanda’s Member of Parliament Veneranda Nyirahirwa says women in Rwanda have fought for political representation. In the Lower House of Parliament women occupy 64 percent or 51 out of 80 seats. Credit: Fabíola Ortiz/IPS

KIGALI, Apr 7 2014 (IPS) – When Rwandan Member of Parliament Veneranda Nyirahirwa was just a girl, she wasn’t allowed to attend secondary school because of her ethnicity.

It was only in the wake of the country’s state-driven genocide in 1994 — where almost one million minority Tutsis and moderate Hutus lost their lives in 100 days — and after a new government took power that she was able to attend high school.

By then she was already in her twenties.

“[Women have] become part of the reconciliation process, we reconcile and help to reconcile others. We are taking things forward.” — Minister of Agriculture and Animal Resources Agnes Kalibata

But she seized the opportunity to receive an education.

Nyirahirwa, 43, is now starting her second term as a deputy in the country’s lower house of Parliament. She belongs to the Social Democratic Party (PSD), the second-biggest of the country’s 11 political parties.

She hails from Ngoma district, Rukumberi Sector in Eastern Province, and remembers that growing up there were many barriers imposed on minority Tutsis attending school.

“We were segregated because of the regime, it was a part of the country … where people who lived there couldn’t go to school due to ethnic problems. It was very difficult to get a place in secondary school,” she explained.

It was the disappointment of her childhood that spurred her on to fight for a seat in Parliament. “I was frustrated watching the ones who were leading our country and I wanted to change things.”

Like many Rwandans, Nyirahirwa lost relatives and friends in the genocide and says, “Every Rwandan must be aware of the causes of genocide and do his or her best to fight against it. I am a Rwandan and I don’t want to leave my country.”

“We are happy for this achievement and for being the majority. There was a time when women in Rwanda were not considered important for the development of the country and they did not have jobs,” she said.

In the September 2013 elections, the PSD won 30 percent of the vote, with Nyirahirwa being one of four women from the party to win seats in Parliament.

But Nyirahirwa’s success is not an anomaly here.

As Rwanda commemorates the 20th anniversary of the genocide this week with memorials across the country, this Central African nation has become a regional leader in promoting gender equity and women’s empowerment.

Women are leading the way in national reconstruction and are considered to be at the forefront of promoting peace and reconciliation. Women, in fact, are leading the nation.

In the last parliamentary elections, Rwanda once again broke its own world record of being the country with the highest level of women’s participation in Parliament.

According to the Rwandan government, average women’s representation worldwide in a lower house stands at 21 percent and 18 percent in a Senate or upper house.

This sub-Saharan country has three times the world’s average of female representation in the lower house, with women occupying 64 percent, or 51 out of 80 seats. During the previous parliamentary term, from 2008 to 2013, women held 56 percent of seats in the lower house.

Rwanda also has twice the world’s average of women’s representation in the Senate: some 40 percent, or 10 out of the 25 seats, are held by women.

There are also 10 female ministers who head up key ministries including foreign affairs, natural resources and mining, agriculture, and health.

Gender empowerment became a reality after the war and genocide when the new government, currently led by incumbent President Paul Kagame of the ruling Rwandan Patriotic Front, took power. It was then, according to Minister of Agriculture and Animal Resources Agnes Kalibata, that the government began addressing national unity and women’s political participation as part of the reconstruction process.

Rwanda’s constitution, adopted in 2003, states that both men and women should occupy at least 30 percent of all decision-making bodies.

Kalibata said that now women are able to compete with men on equal grounds.

“We created a policy environment to give them a fair chance. Rwanda is leading this since we’ve had the decision that we needed to secure a place for women in employment and in the public space. We also want to try to influence the private sector to appreciate that,” she told IPS.

In her opinion, women are at the centre of national reconciliation.

“Empowering the women is part of nation building. Women are the majority and the major part of the agriculture sector. We know how to teach our children, how to handle our communities and how to build society.”

Nowadays, women are able to influence what happens in Rwanda, she argued.

“By influencing how our husbands think, we influence how our children think. And now in politics we also influence how the general population thinks. We’ve become part of the reconciliation process, we reconcile and help to reconcile others. We are taking things forward.”

Kalibata, who has been in charge of the ministry of agriculture for six years, admitted that reconstruction is still a challenge, especially in the field of agriculture.

It is estimated that 70 percent of Rwanda’s 12 million people live in the countryside, with women comprising the majority — 65 percent.

“This nation has had the worse nightmare that any country can have. It is fulfilling to have an opportunity to put it back together through agriculture; there are still many people whose lives can improve because they use agriculture to reduce their poverty,” she said.

When asked about the possibility of a female president, Kalibata said she was confident it would happen after seeing other women on the continent hold the post.

“Yes, a woman president would be great if she is competent enough. This is beginning to happen on this continent. If a woman becomes president it will be because she is extremely competent to manage this country and I would be very happy,” she concluded.

Meanwhile, Nyirahirwa will keep working to change the lives of the people living in Eastern Province. And she intends to stay in Parliament for over 10 years at least.

“There is a significant change: every Rwandan now has the right to education. Before it was difficult to get the right to go to school. Now, we have a chance to go to university and also complete an MBA,” she stressed.

“I want to ensure that every Rwandan is able to get any job anywhere.”