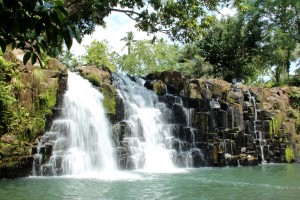 The majestic Bulingan Falls in Basilan, one of the undiscovered tourist spots in Muslim Mindanao. Credit: Kara Santos/IPS

It seems that the Aquino administration has generated enough momentum to push ahead with a new political order in Mindanao.

In exchange, the Philippine government will facilitate the establishment of an autonomous “Bangsamoro” entity in the predominantly Muslim regions of Mindanao. The Philippine Congress is expected to pass a law for enactment of the new autonomous entity this year.

Nevertheless, critics have raised concerns over the viability of the peace agreement and the lack of inclusiveness in the negotiations.

“It has been a difficult road getting here and we know that the path ahead will continue to be fraught with challenges,” declared Teresita Deles, special presidential advisor for the peace negotiations. “In a world looking for peaceful solutions to all troubles, we are grateful that we have found ours.”

Intent on optimising the diplomatic dividends of recent negotiations, the administration of President Benigno Aquino hopes to finalise the establishment of Bangsamoro before the end of its term in 2016. This means the minority Muslim population will finally have an opportunity to enjoy a significant measure of socio-cultural and political autonomy, with the Bangsamoro sub-state entity exercising considerable powers over the management of domestic natural and fiscal resources.

Leaders from across the world welcomed the agreement, hoping that a more stable Mindanao will contribute to the retrenchment of Islamic fundamentalism and extremist ideology in Southeast Asia. U.S. Secretary of State John Kerry congratulated the Aquino administration for “concluding negotiations toward an historic, comprehensive peace agreement,” and hailed the promise of “peace, security, and economic prosperity now and for future generations in Mindanao.”

Washington also commended Malaysia as well as the International Contact Group, composed of representatives and conflict-resolution experts from around the world, for their pivotal role in brokering the final agreement in Kuala Lumpur.

Meanwhile, international investors have turned their attention to economic implications of the peace agreement. Mindanao is estimated to have as much as 300 billion dollars in untapped mining and natural resources. Given the increased regulatory uncertainty in other mining hubs such as Indonesia, investors are considering the prospects of large-scale investments in resource-rich areas such as Mindanao.

The Philippines is already among Asia’s fastest-growing economies, averaging six to seven percent in annual GDP growth in recent years. The Aquino administration has sought to integrate the long-neglected regions of Mindanao into the rising economic tide that is lifting the country. Mindanao is home to one of the poorest regions of the Philippines, with poverty rates increasing in Muslim-majority provinces in recent years.

Given the relative backwardness of infrastructure in Mindanao, post-conflict reconstruction efforts could significantly increase domestic spending and investment rates. Because of its favourable geography and fertile lands, Mindanao is also considered a potential agricultural powerhouse. The economic revival of Mindanao could boost the Philippines’ GDP growth rates by another 0.3 percentage point, according to Standard Chartered economist Jeff Ng.

But the Philippines faces tremendous challenges ahead. Splinter groups such as the Bangsamoro Islamic Freedom Fighters (BIFF) have opposed the new agreement, pledging to continue their struggle against the Philippine government. Immediately after signing the peace agreement, the Armed Forces of the Philippines (AFP) launched an offensive against BIFF fighters, hoping to stamp out any resistance to the implementation of a Bangsamoro entity.

Last year some rebel groups, including members of the MILF’s parent organisation, the Moro National Liberation Front (MNLF), tried to scuttle peace negotiations by launching a siege on Zamboanga city. The result was a massive humanitarian crisis and weeks-long military clashes, which tested the momentum of peace negotiations.

The main concern of other rebel groups was their exclusion from the peace negotiations, and, more importantly, their lack of trust in the Philippine government. In the past, the government and the MNLF were able to arrive at a peace agreement (1996), which paved the way for establishment of the Autonomous Region in Muslim Mindanao (ARMM).

But the final outcome fell considerably short of its initial promises, with the MNLF struggling to cope with governance challenges in the least developed areas of the Philippines. Even worse, succeeding administrations did little to reinforce earlier peace negotiations.

As government officials such as Deles admit, the previous peace agreement “failed to put post-conflict rebuilding mechanisms in place.” There were no credible and sustained commitments by the Philippine government to ensure reintegration of rebels and the rehabilitation of conflict-hit areas. No wonder, there are concerns whether the next administration will ensure proper assistance to the Bangsamoro leadership.

For many civil society organisations, the negotiations also fell short of ensuring full participation of a whole host of indigenous communities in the conceptualisation of a new autonomous entity in Mindanao. The greatest threat, however, stems from deeply entrenched warlords and local oligarchs, who will try to hijack the emerging political order by establishing new networks of patronage politics.