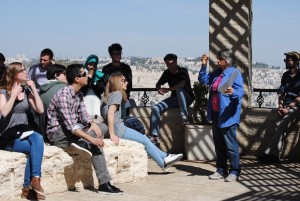 Foreigners and Israelis on a tour with Ir Amim learn about life in East Jerusalem under occupation. Credit: Mel Frykberg

HEBRON, West Bank, march 2015 (IDN) – The ancient biblical city of Hebron, in the southern West Bank, is holy to Judaism, Christianity and Islam and is steeped in historical, archaeological and religious treasures.

However, the hilly, windy and narrow streets, nestled among picturesque hills, belie a bitter and bloody history, and a palpable sense of tension.

The city of Abraham is now home to over 250,000 Palestinians. Less than 1,000 Israeli settlers, guarded by hundreds of Israeli soldiers, live cheek-and-jowl in the midst of the Palestinians, in an atmosphere of extreme hostility.

Over the decades the hatred between the two communities has regularly descended into violence and ended in bloodshed.

In 1994 Israeli settler doctor Baruch Goldstein machine-gunned over 20 Palestinians to death as they prayed in the Ibrahimi Mosque while settlers have also been killed and wounded by Palestinians.

Israel’s occupation has forced hundreds of Palestinians out of their businesses and homes in the city’s old market, and in Shuhada Street a main road in the city centre where Palestinians are forbidden to walk.

Israeli security forces have also been accused by various human rights organisations of abusing Palestinians and killing them unnecessarily.

It is against this background that two peace organisations, one Palestinian and one Israeli, have worked together for justice and to educate Israelis and foreigners about the life under occupation.

Breaking the Silence (BTS) is a group of veteran Israeli soldiers who have served in the Israeli military since the start of the Second Intifada, or uprising in October 2000.
The former Israeli soldiers take Israelis and tourists on tours of Hebron and explain the situation on the ground to them.

“We endeavor to stimulate public debate about the price paid for a reality in which young soldiers face a civilian population on a daily basis, and are engaged in the control of that population’s everyday life,” Achiya Schatz, BTS’s director of public outreach told IDN.
“We explain to the tour groups that Israelis are not the victims of the occupation but that the Palestinians are.”

Many of the Israeli soldiers recall abuses that were committed against Palestinians while they were serving.

“On one occasion we trashed the house of a Palestinian we thought was a ‘terrorist’ and he and his wife were roughed up and taken out into the street,” recalled Schatz.

“We later found out we had the wrong guy. The guy we wanted was living two houses down the road.”

Schatz also recalls commanders of the units being disappointed when they hadn’t been able to kill a ‘terrorist’.

Soldiers from BTS have provided testimony to far worse abuses and Schatz explained that what he witnessed was not exclusive to Hebron but the regular behavior of some Israeli troops throughout the West Bank when dealing with the Palestinian population.
Apart from educating Israelis about the occupation BTS also believes in building bridges with Palestinians, particularly activists.

“It is important to us to introduce Israelis to Palestinians as this helps to break down stereotypes. Often this is the first time Israelis have met Palestinians in person,” said Schatz.

“There is a lot of cooperation between our activists and Israeli activists. We plan things on the ground together such as tours, community action including protests, increasing awareness about human rights violations, and showing Israelis what our lives are like,” Issa Amro, YAS spokesman told IDN.

“When Palestinian and Israeli activists unite and cooperate against the occupation, we call it co-resistance,” added Schatz.

“Many Palestinians and Israelis have become friends as our joint activities have helped us get to know each other better on an intimate basis. Palestinians are also given hope when they see that there are Israelis who care,” Amro explained.

Ir Amim is another Israeli peace organisation that works with Palestinians. It is a non-profit organisation founded in 2004 that focuses on the Israeli-Palestinian conflict in Jerusalem.

Ir Imim established the Jerusalem Policy Forum with the Palestinian NGO, the Peace and Democracy Forum.

The group provides information to the Israeli parliament and Jerusalem Municipality on actions which they believe undermine Jerusalem’s stability, impede equality or threaten future peace negotiations between the Israelis and Palestinians.

It seeks to ensure the dignity and welfare of all its residents and safeguard their holy places, as well as their historical and cultural heritages.

Ir Amim’s public outreach is primarily aimed at the Israeli public, with the goal of re-orienting the public discourse on the issue of Jerusalem.

The group encourages the public to analyse events on the ground and their consequences for Israel. This is done through study tours, media work, briefings, house meetings, and educational programmes.

Swedish tourist Amie Karlsson went on one of Ir Amim’s tours of East Jerusalem. “I wasn’t aware of how disadvantaged East Jerusalem was compared to West Jerusalem,” Karlsson told IDN.

“Ir Amim informed us that East Jerusalem gets only a fraction of the municipal budget that Jewish West Jerusalem gets. It was obvious how neglected the eastern sector of the city was with garbage everywhere, a shortage of street lights and no street signs. However, the Jewish settlements inside East Jerusalem were well tended and cared for,” said Karlsson.

Despite the positive experiences of Israelis and Palestinians working together for peace, Schatz, and other Israeli activists have paid a personal price for their activism and commitment to human rights.

“I’ve received death threats and been called a traitor by former colleagues. It is possible to love Israel and hate the occupation because it is wrong,” said Schatz, adding that the threats and insults were a price he was willing to pay.