India: Women on the Edge of Land and Life 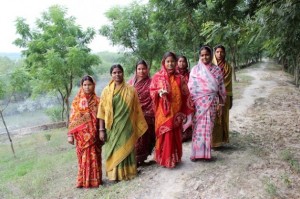 In the Indian Sundarbans, impoverished women band together to fight against hunger, economic insecurity and climate change. Credit: Manipadma Jena/IPS

SUNDARBANS, India, Nov 26 2014 (IPS) – November is the cruelest month for landless families in the Indian Sundarbans, the largest single block of tidal mangrove forest in the world lying primarily in the eastern Indian state of West Bengal.

There is little agricultural wage-work to be found, and the village moneylender’s loan remains unpaid, its interest mounting. The paddy harvest is a month away, pushing rice prices to an annual high.

For those like Namita Bera, tasked with procuring 120 kg of rice per month to feed her eight-member family, there is seldom any peace of mind.

That is, until she came together with 12 other women from the poorest households in the Dakshin Shibpur village of the Patharpratima administrative division of West Bengal to insure their families against acute hunger.

Humble women with scant means at their disposal to withstand savage weather changes and national food price fluctuations, they did the only thing that made sense: set up a grain bank under the aegis of their small-savings, self-help group (SHG) known as Mamatamoyi Mahila Dal.

The system is simple: whenever she can afford it, each woman buys 50 kg of low-priced paddy and deposits it into the ‘bank’, explains Chandrani Das of the Development Research Communication and Services Centre (DRCSC), the Kolkata-based non-profit that matches the quantity of grain in a given number of community-based banks.

In this way, “At least one-third of the 75-day lean period becomes manageable,” Shyamali Bera, a 35-year-old mother of three, whose husband works as a potato loader at a warehouse in the state’s capital, Kolkata, told IPS.

For impoverished families, the bank represents significant savings of their meagre income. “Earlier, the only spare cash we had on us was about 10 to 25 rupees (0.16  to 0.40 dollars),” she added. “Now we have about 100 rupees (1.6 dollars). We buy pencils and notebooks for our children to take to school.”

The women’s ingenuity has benefited the men as well. Namita’s husband, a migrant worker employed by a local rice mill, borrowed 10,000 rupees (about 160 dollars) from the SHG last winter and the family reaped good returns from investing in vegetables, seeds and chemical fertilisers.

The scheme is putting village moneylenders out of business. Their five-percent monthly interest rates, amounting to debt-traps of some 60 percent annually, cannot compete with the SHG’s two-percent rates.

But their problems do not end there.

Designated a World Heritage Site for its unique ecosystem and rich biodiversity, the Sundarbans are highly vulnerable to sea-level rise and intense storms.

Half of the region’s mass of 9,630 square km is intersected by an intricate network of interconnecting waterways, which are vulnerable to flooding during periods of heavy rain.

Roughly 52 of the 102 islands that dot this delta are inhabited, comprising a population of some 4.5 million people. Having lost much of their mangrove cover to deforestation, these coastal-dwelling communities are exposed to the vagaries of the sea and tidal rivers, protected only by 3,500 km of earthen embankments.

Most of the islands lie lower than the 3.5-metre average of surrounding rivers.

Increased frequency and intensity of cyclonic storms due to global warming poses a further, more immediate threat to human lives and livelihood, the report added.

According to the World Wide Fund for Nature-India (WWF), analyses of 120 years’ worth of data show a 26-percent rise in the frequency of high-intensity cyclones.

Nearly 90 percent of people here live in mud and thatched-roof homes. Paddy is the primary crop, grown only during monsoon from mid-June to mid-September.

Forests and fisheries, including harvesting of shrimps, provide the only other source of income, but with a population density of 1,100 persons per square km, compared to the national average of 382 per square km, poverty among island households is twice as high as national rates.

The issue of food security coupled with the damage caused by natural disasters presents itself as an enourmous twin challenge to women here who by and large see to the needs of their families.

Resilient as the forests around them, they, however, are not giving up.

At low tide, the river Gobadia flows just 100 metres away from the Ramganga village embankment, where members of the Nibedita self-help group gather to talk to IPS.

Typically, landless agricultural labourers who comprise some 50 percent of the Sundarbans’ population live in villages like this one, totaling no more than 7,500 people, because natural resources are close at hand.

The members tell IPS that four fairly severe storms from May to December are the norm now. Rain spells continue for a week instead of the earlier two days.

When 100 km-per-hour winds coincide with the two daily high tides, storm surges are likely to breach embankments, cause saline flash floods, devastate both homes and low farmlands, and leave the area water-logged for up to four months.

“The local village government kept promising that it would stone-face the embankment’s river flank and brick-pave the embankment road, which becomes too slippery [during the rains] to cycle or even walk,” group members told IPS

.When these promises failed to materialize, the women took matters into their own hands. Using money from their communal savings, they leased out part of the land along the embankment and planted 960 trees over 40,000 square feet of the sloping property, hoping this would arrest erosion.

“For the nursery they chose 16 varieties that would provide firewood, fodder to their goats, and trees whose flowers and [fruits] are edible,” said Animesh Bera of the local NGO Indraprastha Srijan Welfare Society (ISWS), which guides this particular SHG.

Nothing is wasted. All the forestry by-products find their way into the community’s skilful hands. The mature trees fetch money in auctions.

A 2013 DRCSC baseline survey found that three-quarters of households in Patharpratima block live below the poverty line. Financial indebtedness is widespread. Fragmentation of landholdings through generations has left many families with only homesteads of approximately 0.09 hectares apiece.

Maximizing land is the only option.

In Indraprastha village, women are growing organic food on their tiny 70-square-foot plots, adapting to local soil, water and climate challenges by planting an array of seasonal vegetables, from leafy greens and beans, to tubers and bananas.

These miniature gardens are now ensuring both food and economic security, pulling in a steady income from the sale of organic seeds.

Multi-tier arrangements of plants to maximize sunlight in the garden, the use of cattle and poultry litter as bio-fertilizer, and recycling water are all steps women here take to coax a little nutrition from a land that seems to be increasingly turning away from them.

While NGOs praise the women of the Sundarbans for their ingenuity in the face of extreme hardships, others blame the government of West Bengal for failing to provide for its most vulnerable citizens.

“When their very existence is at stake, the island communities are of course adapting in their own ways, but the government of West Bengal needs to do much more,” Tushar Kanjilal, the 79-year-old pioneer of development in the Sundarbans, told IPS at his Kolkata residence.

“It needs to urgently formulate a comprehensive plan for Sundarbans’ development anchored on a reliable database and make one agency responsible for all development work,” added the head of the non-profit Tagore Society for Rural Development (TSRD).

Until such time as the government takes development into its own hands, self-help groups like those budding all over the Sundarbans – comprising thousands of members – will be the only chance poor communities stand against poverty, hunger, and natural disasters.