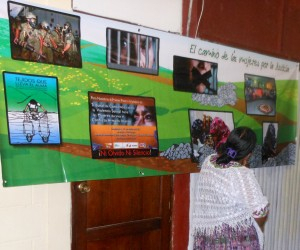 GUATEMALA CITY, Oct 28 2014 (IPS) – On Oct. 14, Guatemala’s Court for High-Risk Crimes ruled that charges would be brought against two members of the Army for sexual slavery and domestic slavery against q’eqchís women in the military outpost of Sepur Zarco, and other serious crimes perpetrated in the framework of the government counterinsurgency policies during the armed conflict.

At the public hearing, Judge Miguel Angel Galvez ruled that there is sufficient evidence to open a trial against Colonel Esteelmer Reyes Girón, former chief of the Sepur Zarco military outpost, and Heriberto Valdéz Asij, former military commissioner in the region.

For six years, women of rural communities of the Alta Verapaz and Izabal departments were the objects of sexual slavery and domestic slavery at the military outpost of the community of Sepur Zarco, located on the border between the townships of Panzós and El Estor.

These crimes formed part of attacks on the civilian population between 1982 and 1988. At the outpost, the women were organised in three-day shifts, and forced to do domestic work, including cooking and washing soldiers’ clothes with no pay whatsoever.

The forced work was accompanied by sexual violence – every time they did their shifts, they were systematically raped by soldiers at the outpost. The sexual and domestic slavery perpetrated against the women of Sepur Zarco formed part of a military plan executed in stages that started with the kidnapping, torture and forced disappearance of their husbands, who were peasant leaders.

After that, soldiers and officers brutally gang-raped the women in their homes, in front of their children. Their homes and belongings were burned and their crops destroyed. Then the women were named by the soldiers as “the widows” and had to move to Sepur Zarco, where they were forced into sexual and domestic slavery at the military outpost.

Even after the military outpost was closed in 1988, the women still faced the physical and psychological consequences of the sexual violence. One of the cruelest results has been that they are stigmatised in their communities.

According to the patriarchal logic, sexual violence is a crime for which the victims must pay. In spite of the fact that the rapes were committed in a context of terror and militarisation, today the women are blamed for the sexual violence they suffered.

The long road to justice

Today the women of Sepur Zarco are demanding justice for these horrendous crimes against them. The road to justice they’ve come down started 10 years ago.

One of the most important strategies they employed was to build groups of women and alliances on the local and national level. They broke the silence and told their hard truth in a process of constructing the historic memory of the sexual violence against indigenous women during the armed conflict, published in a book in 2009.

In 2010, the protagonists in this history, along with women of the other three regions of the country, participated in the Tribunal of Conscience against sexual violence against the women during the armed conflict in Guatemala.

And in 2011, 15 women of the Sepur Zarco group presented a criminal suit in a national court, demanding justice for the crimes committed against them and their family members in the framework of transitional justice.

In this process they have relied on the support of feminist and human rights organisations. For these organizations, the fight for justice of the women of Sepur Zarco is part of their political commitment in favor of eliminating gender violence and the emancipation of women.

The criminal trial brought by the Sepur Zarco women has national and international significance. In Guatemala, to date there is still total impunity for the crimes of sexual violence during the armed conflict.

Although the Commission on Historical Clarification documented the sexual violence against the women was widely and systematically carried out by agents of the state, this is the first time that the charge has been presented in a court of law specifically for rape and sexual slavery.

This case also has worldwide relevance, since it is the first legal proceeding for sexual slavery during armed conflict that has been presented in the national jurisdiction where the acts took place.

It will be a precedent-setting case for all efforts to end sexual violence during armed conflict, one of the most widespread and unrecognised violations of human rights, as well as eradicating impunity for these crimes.

This article originally appeared at cipamericas.org

*Luz Méndez Gutiérrez is the co-author of the book Mujeres q’eqchís: violencia sexual y lucha por la justicia (ECAP-IDRC) (forthcoming). She is a member of the Board of Directors of the National Union of Guatemalan Women (Unión Nacional de Mujeres Guatemaltecas – UNAMG).