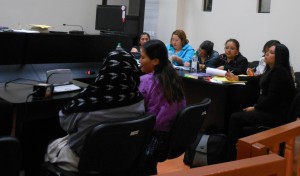 Guatemala City, 2012. Fifteen brave Guatemalan women from the indigenous q’eqchí people testified before the High Risk Court in Guatemala City on Sept. 24-28, as part of the first criminal trial for sexual slavery and rape during the armed conflict.

This legal action is historically transcendent, not only for being the first time that sexual violence during the armed conflict in Guatemala has come to trial, but also because it is the first trial for sexual slavery that has been brought to a national court. Previous cases have been presented in international courts.[1]

Rape constituted for many years the hidden dimension of the war in Guatemala. As a result of the joint struggles of indigenous women survivors of sexual violence, and feminist and human rights organizations, it was possible to place the issue of sexual violence before public opinion and begin to break the silence for these crimes against humanity.

The Historical Truth Commission in its report Remembrance of Silence concluded that sexual rape during the armed conflict was a generalized and systematic practice carried out by agents of the State in the framework of the counterinsurgency strategy. Eighty-nine percent of the victims were indigenous women.

The army used the rape of women as a weapon of war. Massive rapes, marked by extreme cruelty, were carried out indiscriminately of women in communities that were targeted by counterinsurgency campaigns. A complex web of oppressions–class, gender and ethnicity– left as a result one of the most ominous chapters of violence against women in Guatemalan history.

Sexual slavery in the Sepur Zarco base

The crimes of sexual slavery and violence against the women who testified in the court took place in the military camp located in the village of Sepur Zarco, Izabal Department, between 1982 and 1988. This military center, installed by the army at the request of large landowners in the area, was used as a center for rest and recreation for the troops, forming part of a circuit of various military encampments in the Northern Transversal Strip. In this region, economic, national and transnational interests converged around mineral and oil extraction and production of agrofuels. In the eighties, the area was the scene of a huge waves of land grabs against the peasant farmer population.

The tragedy for the group of q´eqchí women began in August of 1982. Their husbands were captured illegally by soldiers and local landowners, then later assassinated or forcibly disappeared. They were peasant leaders, who were seeking open and legal land titles for land they had lived on for generations.

After torturing and murdering their husbands, the soldiers burned their houses and their few belongings. One of the women testifying narrated how she and her young children had to live outdoors for more than a year, covered only by pieces of nylon hung from a tree.

The same day that their husbands were captured, the soldiers raped the women in their own homes, in front of their sons and daughters. Later, they were submitted to sexual slavery and domestic slavery in the military camp for six months. The lieutenant in charge of the base ordered that they organize “women shifts”, through which the women were obliged to report to the military encampment every three days where they were submitted to sexual and domestic slavery. The soldiers raped the women systematically and multiply. Moreover, the women were forced to cook and wash the soldiers’ uniforms.

The history of Dominga Coc made a profound impression on the enslaved women in Sepur Zarco. Dominga, a twenty year-old woman went to the military camp with her two little daughters, Anita and Hermelinda, in search of her husband who had been captured by members of the army in 1982. After arriving at the base, she was captured and raped repeatedly by soldiers in front of her husband and her daughters. After several weeks of being brutally raped, she and her daughters were forcibly disappeared. Her body was found, in early 2012, on the edge of the river and exhumed. Dominga’s husband survived. He presented the testimony in the court. The story of Dominga Coc resonated for years among the women enslaved in Sepur Zarco and became a permanent warning of what could happen to any one of them at any time.

After six months the “women shifts” ended and the women were no longer forced to report every three days to the military base. However, the ordeal continued in other ways for another six years. The women had to continue to do domestic work for free, preparing tortillas in their houses to take to the encampment and washing the soldiers’ uniforms. The soldiers continued to rape the women, in their homes or when they went to wash clothes in the river.

The exploitation reached such an extreme that the women had to buy the corn to prepare the solders’ tortillas and the soap to wash their uniforms. This meant that the women’s children went hungry, since the little money they earned went to buy food for the soldiers under penalty of being sexually enslaved again or murdered.

The effects on the lives of women survivors and their families are very serious and long lasting. For thirty years, the women survivors have faced the psychosocial consequences of these crimes. They have been stigmatized and rejected by society in their communities. According to the patriarchal logic, they themselves are held guilty of the sexual violence they suffered

Testifying before the judge

Thirty years went by before the 15 q´eqchí women could finally testify before a judge and tell the horror stories of what happened to them in the military camp of Sepur Zarco. Their testimonies, presented as preliminary evidence, form part of the penal process that began in September 2011 and is currently in the investigation stage.

The women walked up to the judge with confidence. Their old-woman voices expressed sincerity, certainty, and at the same time deep pain, for the atrocities they related. They spoke in their language q´eqchí and their words were translated to Spanish by other women from their ethnic group. A profound silence, an atmosphere full of consternation and rage, invaded the public, made up mostly of women who filled the hearing room throughout the week.

I don’t want the die without seeing justice done is the expression repeated over and over among the group of women of Sepur Zarco. Their determination to find justice has lasted for thirty years. This determination gave them the inner strength to present their testimonies in the courtroom, in the context of extremely adverse socioeconomic, political and security conditions and enormous risks. According to their concept of justice, the assurance that these acts will never happen again figures prominently. They do not want their daughters and granddaughters to experience the sexual violence they suffered.

The unbreakable will of the women survivors of sexual violence joined with the efforts of feminist and human rights organizations. These–motivated by a political commitment to promote dignity, historical memory and justice for women–have overcome many obstacles and though alliances been able to build an unprecedented and multifaceted process of seeking justice over the course of the past ten years.

As part of this process, women of Sepur Zarco, along with indigenous women from other regions of the country, broke the silence by presenting their testimonies in the First Court of Conscience on Sexual Violence against Women During the Armed Conflict, held in Guatemala City in March 2010.  This political action help pave the path that the women are now walking in search of justice.

All these political and legal actions renew hope and encourage women to keep struggling to put an end to impunity for the deplorable crimes of sexual violence committed against women during the armed conflict. They contribute to confronting acute violence against women today and to continue working together to build dignified and just societies.

Luz Méndez is President of the Advisers’ Council of the national Union of Guatemala Women (UNAMG). She participated in the negotiations as a member of the Diplomatic Political Team of the Guatemalan National revolutionary Unit. She formed part of the team of Gender Experts for peace talks in Burundi, called by UNIFEM; She is a member of the Advisors Council for the Global Fund for Women and a contributor to the CIP Americas Program www.cipamericas.org