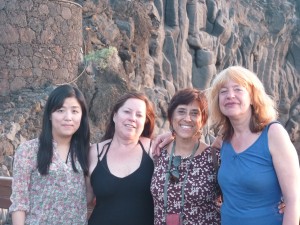 A delegation from 1000 PeaceWomen Across the Globe recently visited El Hierro, the smallest of the Canary Islands, after attending the world congress of the Blue Economy movement in Madrid. Credit: Haiko Pieplow

Madrid/El Hierro, April/May 2013. The 40 members of the delegation that visited El Hierro in late April were very impressed by what they saw and heard: “This island is a model for the world and an example of sustainable development. Its government is putting intelligent policies into practice and creating an eco-social future.”

El Hierro measures only 280 square kilometres and has a population of just under 11,000 inhabitants, making it the smallest of the seven Canary Islands. The delegation comprised some of the 1000 PeaceWomen Across the Globe who have set up projects on sustainable lifestyles and food sovereignty in Mexico, Columbia, China and Germany, and had taken part in the eighth world congress of the Blue Economy movement in Madrid shortly beforehand.

The international Blue Economy network, which is also known as Zero Emissions Research and Initiatives (www.zeri.org), was set up by the Belgian economics professor and entrepreneur Gunter Pauli. The movement is called “blue” because the planet, sky and water are blue. Pauli, a citizen of the world, speaks seven languages fluently and now lives in South Africa with his family. In his view, “green economy” products are too expensive. His aim is to make them affordable for everyone through regional recycling of all waste based on the paradigms of nature and open source use.

At the world congress of the Blue Economy, scientists and female entrepreneurs presented ground-breaking innovations, which included the conversion of Italian petroleum plants into biorefineries, sustainable fishing without nets in Morocco and Indonesia, and paper made in China from crushed stone and PET plastic bottles without using water. All of these initiatives help to save resources, to prevent resource wars, and to preserve peace, including peace with nature.

The group of 1000 PeaceWomen Across the Globe, presented by Ute Scheub, showed its projects on its own panel. Nuria Costa, who works with rural women in Mexico, presented her initiatives, which include women’s banks, ecological villages, and an indigenous market for organic products. Beatriz Toloza from the Colombian university San Gil supports a women’s cooperative that runs forest gardens and is currently setting up a project to convert organic waste into fertile terra preta (black earth).

Lam Tsz Man presented the work of the Chinese peacewomen. Xu Jiying has been conducting research in Beijing for 25 years on how tea flowers can be processed ecologically instead of chemically. The Japanese artist Ayumi Matsuzaka and Haiko Pieplow from the German environment ministry demonstrated how long-lasting humus can be manufactured from solid body waste and used to grow vegetables and flowers.

The Blue Economy movement provided valuable input for El Hierro’s transformation into an ecological island. Gunter Pauli has visited the island six times. El Hierro will probably be able to produce all of its electricity from renewable energies and to provide all of its own drinking water by the end of the year.

There are also plans to only allow electric and biodiesel vehicles on the island by 2020. Cooperatives play a very important role in farming on El Hierro. Wine, bananas, papayas, pineapples and goat’s cheese are the island’s main agricultural products. The aim is to move step by step towards 100% organic farming. And slowly but surely, the island will recycle all of the materials it uses. “However, we are still exploring all of the options,” says Fabiola Avila, the manager of the recycling plant.

The protection of the island’s diverse and sensitive natural environment is the highest priority of the island’s government under President Alpidio Armas. UNESCO recognised the volcanic island as a biosphere reserve in 2000. The island has also applied to become a member of the Global Geoparks Network. The vast majority of the population supports all of these initiatives, as the government regularly includes local people in planning. When you get into conversation with someone on the island, such as a waiter or pizza salesperson, they will often tell you how they like the idea of an ecological island.

Gorona del Viento, a hybrid wind and pumped storage hydropower plant that will cost €82 million to build, will soon take pride of place on the island. This unique power plant will provide the island’s population with renewable energy and water. If everything goes according to plan, Gorona del Viento will start operating in August 2013. Five wind turbines have already been installed. They will supply 11.5 megawatts of electricity to the island’s grid and to the seawater desalination plants, which are currently fuelled by diesel. When there are strong winds, as is often the case in El Hierro, the surplus wind power will be used to pump desalinated water into a storage basin on a higher level. This will serve as an energy and water reservoir for the island, which has previously experienced several catastrophic droughts and water shortages. If there is not enough wind, the precious water will be redirected into a basin located some 150 metres lower down and used to power electric turbines.

The “ecological island” is testing a model from which the whole world can learn. The delegation members were very enthusiastic about all they saw. “This is a unique project which opens up inspiring perspectives and deserves our support,” said Nuria Costa, who coordinates 1000 PeaceWomen Across the Globe in Latin America with a focus on livelihoods, on behalf of the network.