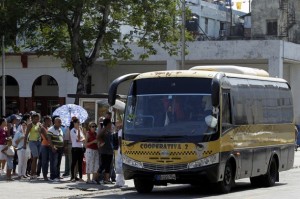 CÁRDENAS, Cuba , Oct 15 2014 (IPS) – Cafés, real estate agencies, taxis and other small privately-owned businesses and cooperatives in Cuba have brought new life to the depressed local economy and have given rise to pockets of prosperity in the country’s towns and cities.

Although it faces restrictions and deficiencies, this growing sector has bolstered the small civil society in this centralised socialist country, where the government has slowly been freeing up the stagnant economy since 2008.

“This is a moment when things are moving ahead, and we have to take advantage of it and keep strengthening it and orienting the community in a direction of greater solidarity and integration,” psychologist Ovidio D’Angelo told IPS during the Oct. 10-11 seminar on “Cuba: sovereignty and future”.

Issues that are controversial in this Caribbean island nation, such as “citizen sovereignty”, were the focus of the first activity of the new project Cuba Posible, in which 64 intellectuals and activists from five provinces took part.

Backed by the University of Oslo in Norway, the project was an idea of the Catholic laypersons Roberto Veiga and Lenier González, and was taken up by the ecumenical Christian Centre for Reflection and Dialogue-Cuba (CCRD-C), based in the city of Cárdenas, 150 km east of Havana.

The citizen initiative addresses hot button issues relating to politics, organises meetings and seminars, and hopes to have a web site and produce digital and print editions of a small magazine, addressing Cuba’s present and future.

There are currently 473,000 people in Cuba registered as “self-employed” in 188 activities in which private enterprise is permitted – 28,000 more than at the start of the year. But that is a small number compared to the nearly five million people still employed by the state, the largest employer by far in this country of 11.2 million, despite a reduction of the government payroll.

In addition, the Council of Ministers approved the creation of 498 non-agricultural cooperatives, 283 of which have already been established. Cooperatives, already widespread in agriculture, have been allowed since 2012 in gastronomic services, garbage recycling, transportation and other areas of economic activity.

“Self-employment and cooperatives are the launching point for a more open civil society,” said D’Angelo, a researcher of the sector in the country, where citizen organisations began to be discussed in the 1990s.

The expert, with the governmental Centre of Psychological and Sociological Research in Havana, said private enterprise and the new cooperatives have only been permitted to alleviate “the inflated state payrolls and the inefficiencies of public enterprises.”

When the authorities announced in 2010 that the private sector would be expanded, they presented the strategy as an alternative for the 500,000 people who were to lose their public sector jobs by the end of 2011. The media reported later that the cutting of the payroll would be a more gradual process.

Since then only a few, isolated figures regarding what the government calls the “labour restructuring” have come out.

For example, between 2010 and 2013 the number of jobs lost in the health sector totaled 109,000. Cuts in the central state administration and the Ministry of Agriculture were also announced.

For that reason, D’Angelo said a “better connection [between private enterprise and cooperatives] with the social fabric of communities should be sought.”

So far, citizen participation in the process of economic changes has been “formal, skin-deep, limited, utilitarian and intermittent,” economist Ricardo Torres said in the debates held at the seminar.

As an example, he cited the fact that “a group of people decided on which activities citizens can engage in within the private sector.” He lamented that no citizen input was sought prior to the decision, and that sectors such as consultancies and other activities attractive to professionals were not included.

Since the reforms began to be carried out, “We have been in a period of a stable, peaceful relationship with the authorities,” Rita María García, the director of CCRD-C, told IPS.

The CCRD-C is one of the more than 2,200 organisations and institutions registered as a national association in the Ministry of Justice.

“At least today it is recognised that we carry out social and community work that is appreciated, in areas ranging from education to caring for the environment, and even in communities that have been neglected by the state,” said García, who is also on the steering committee of Cuba Posible.

García said that “just as the state has recognised that it cannot carry the burden of the economy alone, it should also see that it cannot on its own handle the social burden of care for the elderly, disabled and people living with HIV, among others.”

In its 23 years of activism, the CCRD-C has offered home care for the elderly, and counseling for children, adolescents and young victims of sexual abuse in conjunction with local institutions. It has created more than 300 biogas plants and promotes agroecology and gender equality.

But García complained that “institutions like ours still do not have much room for action and we are still waiting for changes like the new law on associations.”

For years it has been rumoured that the Law on Associations, in effect since 1986, will be updated, although it is not clear when nor what would be the scope of the reforms.

The current law allows the creation of scientific, technical, cultural, artistic, sports, religious, friendship and solidarity associations and others “for purposes of social interest.”

But it does not permit the registration in the Ministry of Justice of activities “that could hurt the social interest” or when another association with the same objectives already exists.

“Although now we have a much more heterogeneous scenario, the options for citizen autonomy and free association remain limited,” activist Maykel González of the Rainbow Project, which advocates respect for free sexual orientation and gender identity, told IPS in an email.

González, who is also a journalist, said “the reforms have accelerated the move towards a more mature civil society.” He added that “political education is clearly lacking.”

Local and foreign studies differ when it comes to their descriptions of Cuban civil society.

Internal opposition groups are illegal and are seen by the Cuban government as small groups of “mercenaries” without any social support base, which only exist thanks to logistical and financial support from Washington, which has been its ideological enemy for over half a century.