Costa Rica Aims at Being the World’s First Decarbonised Economy 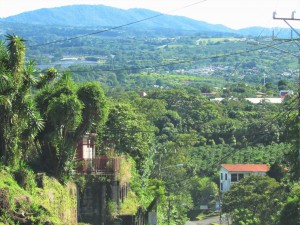 SAN JOSE, 23 Nov 2015 (IDN) – With less than five million inhabitants, Costa Rica became famous for abolishing its army in the late 1940’s, when its Central American neighbours were involved in armed conflicts. After becoming a model of peace in the region, the country now wants to be known as a laboratory for a deep decarbonisation process of the world economy.

This tropical nation is committed to become carbon-neutral by 2021 – the first country worldwide to achieve the goal by the second decade of the 21st century. Such a political ambitious announcement made in 2007 by the Costa Rican government will have to count on the support of society and private sector to become a reality. The year of 2021 marks the bicentennial anniversary of its independence and this goal seems to be strongly supported by Costa Ricans.

In order to accomplish the target, the country is implementing a series of environmental policies to reduce use of fossil fuels, certify companies in regard to carbon emissions and increase percentage of protected areas throughout its national territory.

“We are taking this challenge very seriously and we want to bet in the use of renewable energies. There is an increasing number of companies that are measuring their carbon footprint and are reducing their emissions. We are engaging not only private businesses, but also social movements, cooperatives and the educational sector,” the Costa Rica vice-president, Ana Helena Chacón, told IDN.

Becoming carbon-neutral will help the country to combat and adapt to climate change impacts. Central America is very vulnerable to the effects of global warming, not only due to sea level rising, but also to hurricanes and extreme droughts like the El Niño phenomenon.

Chacón will be the head of the country’s delegation in the COP21 Climate Change Conference in Paris November 30 to December 11 – the 21st session of the Conference of the Parties to the United Nations Framework Convention for Climate Change (UNFCCC).
“We are preparing as a nation to take the message global and show what we have achieved so far in respect of sustainability, the payment of environmental services and connecting biological corridors. We have more than 25% of the territory with public natural reserves,” Chacón said.

The vice-president spoke to IDN during the XI Latin American Congress of Private Natural Reserves, held in the country’s capital San Jose from November 9 to 13 in a protected area on the Pacific coast of Costa Rica. The five-day conference discussed issues on sustainable tourism, biodiversity and environmental conservation in Latin America.

Participants from 13 Latin American countries stretching from Mexico to Chile were in attendance, along with visitors from North America and Europe, some of whom manage private reserves.

The Costa Rican National Parks System run by the public sector has been a model to improve upon sustainable efforts. The National Conservation Areas System (SINAC) now protects 32 national parks, 51 wildlife refuges, 13 forest reserves and 8 biological reserves.
“Nowadays Costa Rica has 52% of the total landmass protected, nearly half of it belongs to national parks, but a portion of more than 10% belongs to private areas. The country has a combined conservation model that is unique, joining public and private areas, and works perfectly well,” Rafael Gallo, president of the Costa Rican Network of Natural Reserves told IDN.

Founded in 1997, this network gathers 220 private protected landowners within an area of 82,000 hectares. Around 60% of the private reserves affiliated to the network are exclusively dedicated to conservation; others address ecotourism, research and education.
“From the 50’s until the 70’s, Costa Rica suffered a lot from deforestation due to coffee cultivation, rice, sugarcane, cattle raising and livestock. People would think in a short term and were not concerned about environment. The shift in mentality came after the 80’s,” explained Gallo.

According to him, the key is to include communities in the conservation activities. “We have to educate and show the new generation that is good to preserve the environment. Communities should know that they can get benefits out of the conservation,” Gallo stressed.

Gallo is thoroughly engaged in the country’s carbon-neutrality target towards 2021. “Our forests produce oxygen and can offset what others emit.”

Edmundo Castro, an agricultural economist specialized in natural resources, has developed a pioneer program in Costa Rica to support the country’s movement to carbon-neutrality. Over the last sixteen years, the expert has been lecturing classes in the EARTH University – an international non-profit school of sustainable agriculture based in Costa Rica. In 2008, Castro founded a program addressing carbon emissions reduction.

“We are creating a culture of carbon-neutrality and diminishing greenhouse gas emissions. We aim that our more than 1,000 graduated students become leaders and agents of change that could work in their communities bringing local based solutions”, Castro told IDN.

Castro said the academia and companies are “deeply concerned” to help Costa Rica to meet its pledges. Becoming carbon-neutral, in his opinion, means that corporate responsibility should internalize the environmental costs in their productive activities.
“It is a new concept that can generate opportunities for businesses and for the society. When we deteriorate environment, people might be affected negatively, especially the poorest ones who are the most impacted.”

Castro dreams of converting Costa Rica’s economy into a huge protected area in which not only the State should drive the change in the economic development but also the society should be engaged in this paradigm shift.

“My dream is to transform Costa Rica into an enormous natural reserve. We ought to understand that we can generate wealth from preserving nature, engaging in carbon markets and having a positive social impact within the families.”

A sense of optimism is spread throughout the public sector, such as the Ministry of Environment and Energy (MINAET) that is leading the change, and the academy that took the forefront in developing ground breaking research methods to certify companies in order to achieve zero carbon emissions.

One of the contributions came from Castro who developed a certification process through EARTH to verify and assess greenhouse gas emissions. Costa Rica has certified 50 enterprises so far, but it is still far from achieving the goal: having all the country’s businesses – over 50,000 certified.