Ban´s Second Term: The Case for a Women Secretary-General 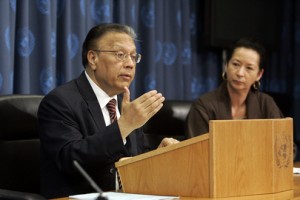 NEW YORK, Jun 20, 2011 (IPS) – Last Friday’s recommendation to give the incumbent U.N. Secretary-General Ban Ki-moon another five-year term drew the international community’s attention to another opaque, non- democratic process that is the hallmark of the 15-member Security Council’s decision-making.

The Council’s endorsement of Ban’s second term came even in a closed- door meeting, not open to other members of the U.N., not to speak of civil society or the media.

It is well-known to those knowledgeable in the affairs of the world body that the five permanent members of the Council are more comfortable in dealing with a weak, non-performing, acquiescent leader as that ensures that they have their say in the decision- making of the organisation, particularly in the matters of maintaining global peace and security. As a matter of fact, they look for a leader who could be led.

This aspect also highlights another dimension of the much-needed reform of the Security Council – the World War II victors’ privilege of veto power of the permanent members commonly referred to as the P5 (in recent years, the 10 other members appointed for two-year terms are described as the E-10, elected 10).

In the choice of the secretary-general, the veto, threat of veto or the unrecorded veto in straw polls of the last few elections to shorten the list of candidates have resulted in a convoluted process, having the effect of eliminating the candidates of acknowledged management and leadership qualities.

This unclear, closed-door, behind-the-scenes and exclusionary process results in the recommendation of a person for the first term who is dreaming of re-election for a second-term from the very first day in office.

This very human temptation for a second-term is so overwhelming, so intoxicating that the incoming secretary-general’s main effort in office is wholly conditioned by this desire. Keeping fully in perspective this “veto element”, the wishes and inclinations of the P5 get the priority attention of the “Chief Administrative Officer” of the U.N.

The conventional understanding in the corridors of the U.N. is that the debt that an SG accrues from the P5 during his first term for his re-election gets paid off during the second term. This arrangement serves both the secretary-general and P5 well.

More so, because they know full well that the broader membership of the U.N. is never able to agree to long overdue reforms of the unacceptable electoral process for the head of the secretariat. This encourages the possibility of a lacklustre leader to emerge, particularly if a U.N.-antagonist P5 representative like former U.S. Ambassador John Bolton contributes to the selection process.

Friday’s recommendation and Tuesday’s no-option, obligatory concurrence of the U.N. General Assembly confirming the Security Council’s decision brings to focus certain basic, fundamental changes which are needed to make the choice of the next secretary-general worthy of the prestige, universality of this “Parliament of Nations” and suitable to lead humanity in the first decades of the 21st century.

First, the process should be open, fully transparent, participatory, and democratic with full engagement of the member-states and civil society. Yes, the U.N. remains an inter-governmental institution, but that does not mean that global civil society which is dedicated to the strengthening of the U.N. could not be consulted broadly.

The General Assembly needs to be fully involved and have equal say in tandem with the Security Council. As a matter of fact, both these primary organs of the U.N. would have the equal responsibility of finding and subsequently electing the person who would work for the best interest of the organisation without fear or favour. The candidates would be required to face the membership as a whole to establish their real credentials to lead and to be judged by all.

Another important idea to ensure independence of the secretary- general would be to make the office restricted to one term for each incumbent. The current five-year term could be extended to six years. Six years is adequate for any leader worth the name to show what can be achieved for any global institution.

And the most important “reform” that is needed for the choice of the U.N. leader is in the mindset of the member-states. At this point of time in human progress, it is a shame that in the 65 years of its existence, the U.N. was not able to elect a woman to lead. Not only that, there has been no candidate even nominated to be considered for election.

Notwithstanding all the U.N. resolutions, treaties, declarations and pronouncements asserting the equality of women, it is a pity that the U.N. has kept 50 percent of humanity out of consideration for its highest position. The organisation is undoubtedly poorer as it restricted its choice only to half of the potential candidates.

The suffering image and credibility of the U.N. in the eyes of the international community in recent years underscores the increasing need for effective and committed leadership that puts the organisation before self and is not solely triggered by “command and control” mode.

After all these years of men heading the U.N. secretariat, it would be very fair to elect the next secretary-general from amongst the women candidates open on a worldwide basis without any regional restriction as it would be the first such occasion. Such a “positive action” would be very necessary and appropriate for denying the world’s 50 percent of their due share.

As almost all of the U.N. members are State Parties to the Convention, they should act according to this obligation when they appoint the SG. The Security Council should also pay attention to its own resolution 1325 in the selection process for the secretary- general that emphasised equal participation of women at all decision- making levels.

These also tell us very emphatically that the choice-base for the secretary-general should be expanded to include women. In reality, the U.N. has violated its own treaties and resolutions by keeping women out of consideration for the position. Even a traditional male- dominated institution like the International Monetary Fund could soon show the way by electing a woman managing director.

One wonders what kind of existing culture and deep-seated biases in the U.N. has made this very crucial aspect out of its discussion even in the context of wide-ranging U.N. reforms. Perhaps the sole opportunity for an indelible legacy for Ban would be to step down halfway into his term, conditional upon the election of a woman secretary-general.

*Anwarul K. Chowdhury is a former Under-Secretary-General and High Representative of the United Nations, and served as President of the Security Council in 2000 and 2001.